I’m enjoying all the nature sightings of recent weeks and months, the benefits of these creature sightings far outweigh anything negative! There is nothing like experiencing wild animals among us when we’re in our own yards or visiting other locations! And although I have had a few inopportune moments with critters and bugs recently too, I focus on the positive impact the sightings of less pesky creatures have upon my life rather than the imperfections we can often face when human beings meet the wild! Just last month, I had a scare when I found a live scorpion in the upstairs guest room in which I was staying at my sister’s house! It was not pleasant whacking it with a shoe and praying there were no others for the few days I was visiting! But, it was a one-time sighting in a slew of visits, so I let it go and enjoyed my visit. And on that particular visit, I went whale watching on a trip in which I experienced seeing humpback and minke whales, as well as seeing a super pod of common dolphins! That and several other nature-oriented experiences made the scorpion sighting less memorable for sure!

Just yesterday, I saw a family with sixteen baby quail in my front yard! It was delightful to watch the brood scurry and scamper beside their parents. Quail are common visitors to my yard, but their families are not often that numerous! They’re so tiny when newborn, yet so proficient in their quail duties! This sighting came just hours after I had to remove the rather stinky rotting carcass of some poor dead creature laying in the backyard. Perhaps it had fallen prey to some other animal’s attack. Again, the benefit of the large quail family sighting far outweighed the nastiness of removing the stinky corpse! I’ve also recently had numerous rabbit sightings, with plentiful baby bunnies being born in the last few months. The sightings of the tinier babies more than make up for the nibbling older rabbits which insist upon gnawing my plants to stubs or to dust! Babies in my yard are always welcome, even when I realize how voracious they’ll be as adults one day soon!

With Summer in the desert, we get an influx of several types of bugs which aren’t prevalent the rest of the year. Those include pesky mosquitoes which seem to thrive in the heat, big 2 – 3″ paloverde beetles and cicadas which buzz incessantly from their perches in trees throughout the landscape. The presence of these bugs is a nuisance often, as they creep around in places which are unexpected and the mosquitoes bite all the uncovered flesh which is more prevalent with the heat of Summer! I’ve even been bitten by mosquitoes while swimming in the pool! Short of swimming underwater only, I’m not sure I know how to evade those pests entirely! And everywhere I look in the yard, ants are busy doing whatever it is ants do! They’re usually not an issue, until I stop in their pathway in my sandals, often getting bitten for my error in judgment. 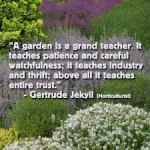 It’s always the case in Summer that I wish for a bit of relief when it comes to nature’s more pesky creatures. Bugs and creepy crawlers, snakes and lizards are not my favorite things. But this morning I was overjoyed to return a tiny gecko to the outdoors after finding it indoors on the carpeting by my front door! Those little things are cute, but they’re not meant to live indoors! I’ve already seen enough cuteness watching the common species of birds, the lovebirds which have naturalized, the lizards, squirrels and the bunnies running around while I watered this morning! Anything which seems negative at first with the creatures around me is always balanced out by something wondrous and fascinating to observe! Nature is a diverse, fantastical showcase of God’s miraculous handiwork and design! It’s both uplifting and at times, overwhelming and/or scary! It is just a part of living in this magical world which God has created!